This article will analyse our last case. As the enforcing party and after a long enforcement proceeding, we finally managed to have the auction called of the asset seized: specifically, 50% of the indivisible part of a plot in Palma de Mallorca, valued at a total of approximately 4,000,000 euros. That is, the value of the indivisible part to be auctioned was 2,000,000 euros and the debt we claimed amounted to just over 300,000 euros for principal, ordinary interest, interest for late payment and provisionally calculated fees for the enforcement proceedings.

Despite the fact that there were many parties interested, two days prior to the deadline to present offers by bidders, we found there was only one offer which did not cover the value of the debt. Given this circumstance, we were warned of the possibility that, if the auction took place without any bidder to be considered, the court, pursuant to Article 671 of the Spanish Law on Civil Procedure (Ley de Enjuiciamiento Civil) would demand payment of 50% of the appraisal value of the indivisible part so as to, as the enforcing party, avoid the cancellation of the seizure over the plot. That meant we would need to pay approximately 700,000 euros, which is the result of deducting the amount of the debt from 50% of the appraisal value.

This is, consequently, a case that seems not to be contemplated in Article 671 of the Law on Civil Procedure. For this reason, after examining the matter more closely, we must warn of the existence of varying interpretations which give rise to an unresolved controversy.

This disparity is the result of the “progressive doctrine” of the Directorate General of Registries and Notary Offices, which has a broad interpretation of the regulation to avoid that its literal wording could seriously harm the debtor-consumer. Said interpretation arose by way of a resolution by the General Directorate of Registries and Notary Offices of 20 September 2017 (Official State Gazette of 16 October 2017), the first in rejecting the recording of the award of the property mortgaged for less than 50% the value of the property after an auction without bidders of a property that was not a primary residence, as it was demanded that the award be made at minimum, in any case, at that percentage. This theory, which was confirmed in subsequent rulings, comes from a systematic interpretation of Articles 651 and 671 of the Law on Civil Proceedings together. It was understood that although in the former article there was a limitation on the awarding of the real estate assets, then, by analogy, it should also apply to the real estate assets. 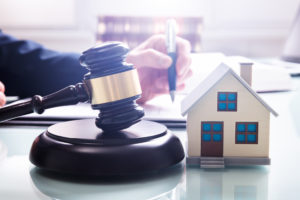 The aforementioned interpretation, however, goes against the classic case law of the Supreme Court, which considers that no award made lawfully, applying a legal prevision, may give rise to the unfair enrichment of the awardee and this independent of fact that the referred award takes place for a negligible or extremely low amount. Nevertheless, and without prejudice to the aforementioned doctrine of the Supreme Court, there are multiple court decisions in favour of the theory of the Directorate General of Registries and Notary Offices. These include, for example, the ruling of 26 December 2018 of the Court of First Instance no. 21 of Seville, ruling number 296/2018, oral hearing 729/2018.

Although in our case, the auction was suspended in the end, as the day before the deadline to present bids the enforced party deposited the total amount of the principal claimed, we believe it essential to highlight a flagrant legal lack of security arising from the lack of uniformity of the different courts in this matter. This could result in significant repercussions for the enforcing party, who may find itself obliged to make a hefty payment to avoid the cancellation of the seizure over the assets auctioned without bidders.

In conclusion, the absence of consensus in the interpretation of Article 671 of the Law on Civil Procedure may, as we have seen, imply that the court opt to apply the doctrine of the Directorate General of Registries and Notary Offices, that is, that in the event that there are no bidders in the auction and to avoid cancellation of the seizure over the asset auctioned, the enforcing party, as a creditor, finds itself in the position of having to use the power to award itself the asset auctioned; this could imply the obligation to pay 50% of the value at which the asset would have begun the auction. Given this possibility, we consider it essential to carry out a careful preliminary assessment of the assets of the enforced party to be auctioned in light of the fact that the enforcing party may need to make a significant payment  if the difference between the debt and the assessment value of the auctioned asset is considerable.